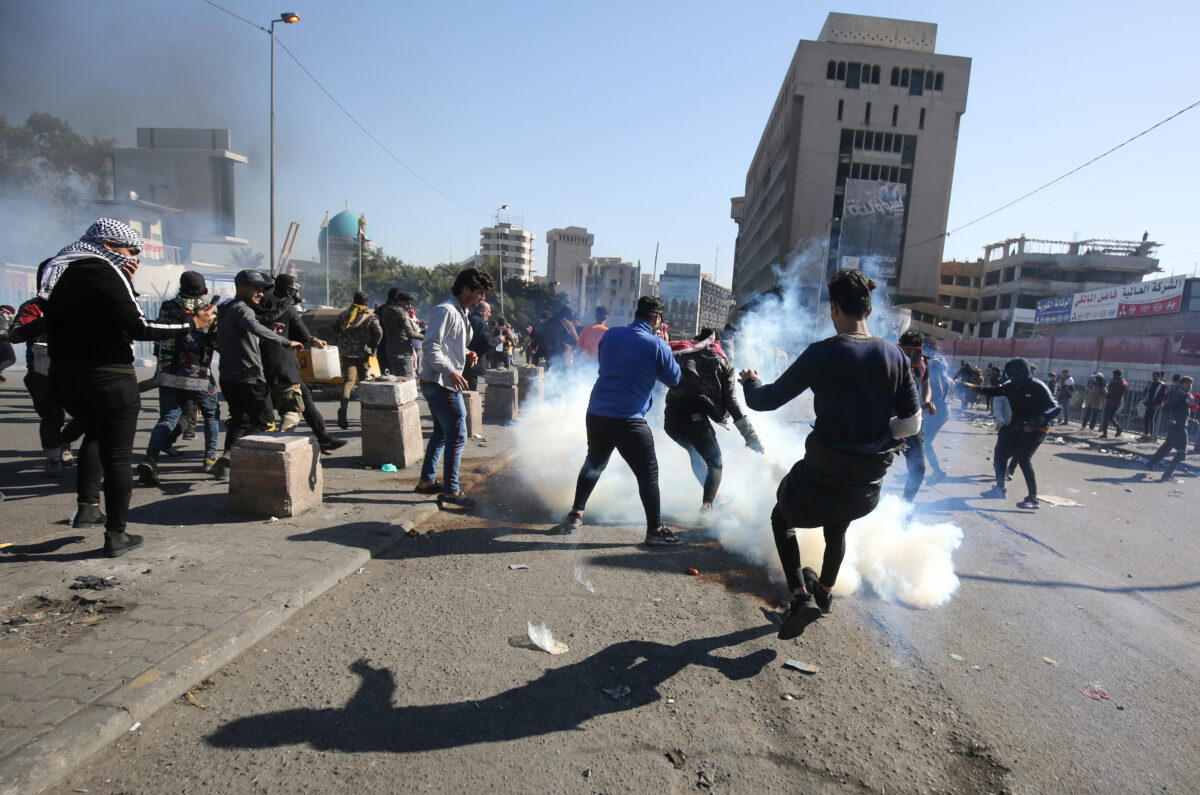 A number of rockets struck the U.S. Embassy in Baghdad, injuring at least one staffer and causing some material damage as clashes in the region over the weekend left at least five anti-government protesters dead.

The United States has “expressed outrage” over the latest attack.

Five Katyusha rockets hit the embassy on the evening of Jan. 26, according to the Iraqi military, which reported no casualties. Iraqi security forces were pushing back in an attempt to end months of demonstrations by protesters against the largely Iran-backed ruling elite.

Who was behind the rocket attack wasnt immediately known. The U.S. Embassy didnt immediately respond to a request for comment by The Epoch Times. An automatic email response from the U.S. Embassy in Baghdad noted that “as of Jan. 1, 2020, all consular services are suspended.”

Secretary of State Mike Pompeo on Jan. 27 “expressed his outrage” at the continued attacks by Irans armed groups against U.S. facilities in Iraq, including the rocket attacks against the U.S. Embassy, in a phone call with Iraqi Prime Minister Adil Abd al-Mahdi, according to State Department spokesperson Morgan Ortagus.

“The Secretary underlined once again that these attacks demonstrate a wanton disregard for Iraqi sovereignty and a failure to rein in these dangerous armed groups” Ortagus said in a statement. “He appreciated Prime Minister Abd al-Mahdis commitment to strengthen security to protect American personnel and diplomatic facilities.”

Pompeo noted that the United States views the rocket attack on the embassy as “an attempt to distract Iraqi and international attention away from the brutal suppression of peaceful Iraqi protesters by Iran and its proxies,” according to Ortagus.

The Iraqi government moved swiftly to denounce the attack and said it would investigate and arrest those who launched the rockets. In December 2019, the United States urged Iraq to take steps in stopping attacks by Iran-backed groups on bases hosting U.S. forces in Iraq.

“We denounce the continuation of these outlawed actions that have the goal of weakening the Iraqi state and violating its sovereignty and the sanctity of diplomatic missions on its soil,” Iraqi Prime Minister Adel Abdul Mahdi said in a statement released on Jan. 26.

Mark Cancian, senior adviser at the International Security Program at CSIS, told The Epoch Times it appears that Iran is “apparently not standing down as many had hoped but is continuing its attacks on the United States using proxies, as it has done often in the past.”

“Trump has drawn a clear red line on the killing of U.S. citizens,” Cancian added, via email. “If the Iranian attacks do kill Americans, then there could be another round of escalation.”

Authorities began the pushback on Jan. 25 as demonstrators called for the removal of all politicians, free elections, and an end to corruption. Anti-government protests have gripped Iraq since Oct. 1, 2019, when thousands took to the streets in Baghdad and the predominantly Shiite south.

In an earlier Jan. 23 alert, the U.S. Embassy warned about anti-American demonstrations taking place in central Baghdad on Jan. 24. The alert also warned U.S. citizens not to approach the embassy.

The embassy on Jan. 11 also renewed its travel advisory for Iraq. The Level 4 rating advises travelers not to travel to Iraq “due to terrorism, kidnapping, and armed conflict.”

Nearly 500 people have been killed in the unrest, with both security forces and unidentified gunmen shooting people dead. After a lull earlier this month, demonstrations resumed; protesters have controlled three key bridges in Baghdad and maintain camps and roadblocks in several cities in the south.

The government has responded with violence and piecemeal reform. The international community has condemned the violence.

The United States has repeatedly denounced the Iraqi governments attacks against its protesters and the media. At one point of the protests in November 2019, at least 45 anti-government protesters were shot dead by Iraqi security forces after demonstrators _